Nvidia recently announced its new range of GTX 1000 Series graphics cards and you can already buy laptops on the market that have the new cards inside of them.

In a huge leap forward for technology, Nvidia has dropped the ‘M’ tag off laptop GPUs and instead managed to get its fully fledged desktop cards small enough to sit inside a laptop.

Early benchmarks are suggesting the Pascal based GTX 1070 GPU provides a 158% speed increase over the previous GTX 970M.

If you’re an early adopter and looking to upgrade ASAP, then take a look at our list outlining the Best Laptops with GTX 1000 series GPUs currently available.

The MSI GT73VR Titan Pro is one of the new laptops with a top of the line GTX 1080 graphics card.

Early benchmarks show that the GTX 1080 completely blows the GTX 980 out of the water, thanks to the new Pascal architecture.

Gamers all round can rejoice.. Laptops can finally match the performance of desktops!

To make sure you have enough space for your OS and your favorite games, the GT73VR Titan Pro comes with a big 512GB SSD which aids in quick load speeds.

For all of those files, photos and videos, you also get a 1TB hard drive for regular storage.

It’s no fun trying to game on a laptop with a small screen, which is why the GT73VR has a 17.3” Full HD screen with wide viewing angles. It’s also glare free if you’re an outdoors gamer.

The downside to fitting a desktop graphics card into a laptop is the increase in weight. The MSI GT73VR Titan Pro weighs in at 8.6 lbs. I would assume that gamers that are serious enough to buy this laptop aren’t going to be carting it around all day, so weight shouldn’t be an issue.

Additionally, the powerful performance lends itself to a poor battery life with the GT73VR getting an average 3-hours of juice from its battery.

A SteelSeries, full color backlit keyboard makes this laptop a breeze to type on and the keys feel responsive and chirpy.

MSI has opted to go for its black look with black brushed aluminum lid and red accents, consistent with their gaming range.

Overall, this is one beefy laptop that delivers incredible performance.

At the forefront of the performance is the Nvidia GeForce GTX 1070 graphics card, capable of giving you 60+FPS on Ultra settings for newer games.

Together with the GPU, an Intel i7-6820K CPU and 32GB of RAM ensure the rest of the system is also powerful and well balanced.

For your favorite games and operating system, the 256GB SSD speeds up your loading screens and 1TB of hard drive space should be plenty for your other storage.

Some people are skeptical of laptop gaming due to the screen sizes, but the Asus ROG G752VS-XB78K OC Edition comes with a wide 17.3” Full HD display with IPS panel, giving you incredible 178-degree viewing angles.

With such a powerful GPU being fit into a laptop, weight is a sacrifice that you’re going to have to make. At 9.5 lbs, the G752VS-XB78K is one heavy laptop.

To some, a poor battery life might be a negative. But if you’re using your laptop as a desktop replacement, it isn’t a problem. The Asus comes with a 3-hour battery life which may be limiting for some.

The ROG G752VS-XB78K has a very gaming-orientated design. Beautiful brushed aluminum contrasts with Copper colored accents to give this laptop a sleek look.

The MSI GT72VR Dominator Pro is another laptop with the brand new GTX 1070 and is also VR ready!

Nvidia has done a great job in making their laptop GPU’s only slightly slower than their desktop counterparts, closing the gap between desktop and laptop performance.

The GTX 1070 gets great framerates on newer games, having no issues getting an average of 72 FPS on maximum settings on Metro: Last Light Redux.

In addition to the GPU, the MSI GT72VR Dominator Pro is equipped with an Intel Core i7-6700HQ CPU and 16GB of RAM which allows you to easily multi-task.

An adequate 128GB SSD gives you enough for your OS and a fair few of your favorite games whilst the 1TB Hard drive is plenty for all your other files.

Games look fantastic on the 17.3” Full HD display (especially on max settings!) which also has an anti-glare coat on it.

At 8.3 lbs, don’t expect to be carrying the laptop around with you day-to-day unless you’re a regular gym goer.

With powerful performance comes poor battery life and the GT72VR gets about 3 hours worth, enough for you to find a charger.

In line with the traditional MSI look, the Dominator Pro gets the sleek, black brushed aluminum lid with matte black base. Red accents adorn the vents and front lighting.

The inclusion of a SteelSeries, full color, backlit keyboard is a nice touch from MSI and it feels great to type on.

The Gigabyte P35Xv6-PC4K4D has a brand new GTX 1070 graphics card, is VR ready and has a fantastic 4K Ultra HD display.

As some people prefer 15.6” screen sizes, I thought it was only fair to include it on the list! The display is also Full HD with 4K 3840 x 2160 resolution, giving you plenty of screen real estate to work with.

Run by a quick Intel i7-6700HQ processor and a massive 32GB of RAM, you can be sure the P35Xv6-PC4K4D will be able to handle the latest games without an issue.

A very modest 512GB SSD will be able to hold your game library and your OS for speedy boot times. Additionally, you get a 1TB hard drive for any extra space you may need.

The Gigabyte P35Xv6-PC4K4D has an all matte black design, which gives it an unassuming, stealthy look.

Of the laptops on this list, this laptop is the lightest at 5.3 lbs which makes it about the mid range weight for gaming laptops.

The Gigabyte comes with a fairly average 3-4 hour battery life, which is still higher than some of the other choices.

All-in-all the P35Xv6-PC4K4D is a solid choice for a gaming laptop. 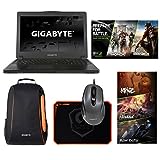 The MSI GS73VR Stealth Pro 4K is the second 4K display laptop on our list, but this time sports a 17.3” screen.

The GS73VR Stealth Pro has a Nvidia GTX 1060 graphics card. Compared to the GTX 1070, the 1060 still delivers impressive FPS benchmarks, and compared to the previous 900 series is quite a bit better.

An Intel i7-6700HQ processor and 16GB of RAM ensure adequate performance across the board.

Included storage wise is a large 512GB SSD which should provide ample room for your games. Almost standard these days is the 1TB hard drive for extra storage, should you need it.

One of the most impressive talking points of the MSI GS73VR Stealth Pro 4K is the 4K display! The 17.3” Full HD 4K screen sports a 3840 x 2160 resolution to give you incredible pixel depth.

A SteelSeries full-color, backlit keyboard provides great feedback and is fun to type on for hours at a time.

The GS73VR is tied with the Gigabyte laptop in weight at 5.3 lbs. This is impressive given the larger screen size.

A modest 3-hour battery life is in line with the standard across the board and gives you just enough to find a power point.

From a design standpoint, the GS73VR has a dark gray/black brushed aluminum look that extends from the lid to the base of the laptop. Red accents help to give off a gaming vibe to the laptop.