For some, the thought of forking over $400 for a GoPro might seem a little daunting. And why would you, when there’s a quality camera that comes with a plethora of accessories for a quarter of the price?

The idea of spending less on a camera and more on the actual hardware, whether that be a surfboard, skateboard or anything in between, might be a more favorable option for some people and Akaso has filled that niche with the Akaso EK7000 4K WIFI Sports Action Camera. 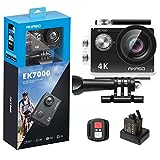 We were incredibly impressed with the specs and quality of this budget camera, and it poses a serious threat to the GoPro range, although it does lack a few features that the more pricier options include.

Given that it looks, feels and performs almost as well as a GoPro and is fully compatible with any GoPro mounts and accessories, you’d be silly to not consider the EK7000.

The EK7000 has been designed to face the elements. In the package you receive an IP68 waterproof case that is rated underwater up to 30m, making this a great camera for water sports like swimming, surfing, snorkelling etc.

It’s an easy system and after a couple of attempts, you’ll really have the hang of working your way around.

Aesthetically, the EK7000 has a glossy black exterior and looks incredibly similar to a GoPro.

The two-inch touchscreen on the back is bright and easy to see and on the side are ports for an SD card, micro-usb, and HDMI cable. On the bottom is a cover which hides the removable battery.

From a size perspective, the Akaso is as big as a GoPro Hero 5 and will fit in the palm of your hand. It works seamlessly with all the provided attachments and is also completely compatible with any GoPro mounts or attachments.

We dropped, bumped and submerged the camera underwater plenty of times and the screen, lens and casing all came out without a single scratch, so this gets an A+ for build quality!

One thing to take note of is that the camera comes with lots of protective film over the screen and lens which will make the footage seem blurry, unless you remove it before use.

We took the EK7000 out for a number of different tests, from the beach and pool in the sun, to a forest walking track in the rain.

Firstly, we were majorly impressed with the image quality. This camera shoots 4K ultra HD video at 25fps, 2.7k at 30fps and 1080P at 60fps. Photos can be shot at up to 12MP which is perfect if you’re a photo editor.

With a 32GB microSD card, you can expect to get around 1.5 hours of 1080P/60fps video footage from each of the two rechargeable batteries included.

Unfortunately the camera FOV is stuck to 170 degrees, which means it’s permanently wide angle, unlike the adjustable FOV that the GoPro has.

There is three different photo capture modes, single, burst and time-lapse. Burst takes a number of photos in really quick succession so you get photos in an almost freeze-frame type format.

Time-lapse is a little confusing as with the normal time-lapse function you’ll basically get what most people consider to be a countdown timer/delay.

To get a traditional time-lapse, you need to go into the settings and change ‘continuous timelapse’ to ‘yes’ and then set the time delay between shots to 2 seconds under the time-lapse menu.

One possible annoyance is that the camera saves your footage every 10-minutes. Great you say, that means if something happens or I run out of battery, then I still have most of my footage?

Correct. But that also means that when you upload the footage to your computer, 60-minutes of footage gets split into six different 10-minute files, which means you’ll need to use a video editing program to splice the six files into one.

The EK7000 might lack some of the more finer features of the GoPro range, such as image stabilization, the ability to shoot stills in Raw and the Wide Dynamic Range feature, but for a budget choice, we were more than satisfied.

You can also control the camera settings through your Phone, which is handy if your camera is mounted in a spot that is hard to reach (such as on a head mount).

Inside the box, you’ll find an incredible number of accessories for an item of this price:

The included wireless wrist remote control is great and allows you to control the camera (take photos, start recording) etc. just by pressing a button on the wrist remote.

You could also theoretically put the wrist strap around your bicep, although it could possibly be a little tight.

With the plethora of mounts and straps, the EK7000 represents fantastic value for money.

Cyclists will be happy to see the included bicycle mount and helmet mount, whilst the seven included mounts can be used to mount the camera on surfboards, kayaks etc.

As mentioned above, the included waterproof case is very sturdy and doesn’t affect the quality of the video taken. You also get an extra ‘protective backdoor’ for the case which is basically an additional back panel. You should note that the extra panel isn’t waterproof!

Other accessories include a USB Cable for transferring footage, an AC Charger for the batteries, a Lens Cloth for cleaning the screen and lens and a Manual.

To transfer, edit and share your video footage, you need to download the EZ iCam App on your phone or tablet.

Once you have the app, you simply pair the phone and the camera by connecting to the same WiFI network using the passcode 1234567890.

That is the recommended advice anyway. Personally, I found the EZ iCam App to be a massive pain and went searching around for another app that would work a bit more reliably.

Upon further research, I discovered the PNJ iCAM app, which is far more user friendly and worked without any issues. It should be noted that the PNJ iCAM app says it only supports up to 32GB microSD cards. I didn’t have a spare 64GB card so I can’t verify these claims.

For a budget option, the EK7000 represents incredible value-for-money. We were thoroughly impressed with the image quality in a range of scenarios, both above and below water.

We found the buttons responsive and the waterproof case showed no signs of letting water in, even going 5m underwater.

You’re going to experience issues with the app, no doubt about it. But for what you get included and the quality (both performance and build) for the price that this camera is at, we can live with it. A longer battery life would’ve been nice, but they do include two batteries for that reason.